Back at the end of June 2012[0] there was a brief IT hiccup as the world adjusted the Coordinated Universal Time (UTC) standard by adding an extra second to the last minute of the 31st of June. Normally such an adjustment would pass unnoticed by all but a small dedicated collection of time keepers, but this time the story spread out into the popular media as numerous Linux systems hiccupped over this additional second, and they supported some high-profile services, including a major air carrier’s reservation and ticketing backend system. The entire topic of time, time standards, and the difficulty of keeping a highly stable and regular clock standard in sync with a slightly wobbly rotating Earth has been a longstanding debate in the International Telecommunication Union Radiocommunication Sector (ITU-R) standards body that oversees this coordinated time standard. However, I am not sure that anyone would argue that the challenges of synchronizing a strict time signal with a less than perfectly rotating planet is sufficient reason to discard the concept of a coordinated time standard and just let each computer system drift away on its own concept of time. These days we have become used to a world that operates on a consistent time standard, and we have become used to our computers operating at sub-second accuracy. But how do they do so? In this article I will look at how a consistent time standard is spread across the Internet, and examine the operation of the Network Time Protocol (NTP).

Some communications protocols in the IP protocol suite are quite recent, whereas others have a long and rich history that extends back to the start of the Internet. The ARPANET switched over to use the TCP/IP protocol suite in January 1983, and by 1985 NTP was in operation on the network. Indeed it has been asserted that NTP is the longest running, continuously operating, distributed application on the Internet[1].

The objective of NTP is simple: to allow a client to synchronize its clock with UTC time, and to do so with a high degree of accuracy and a high degree of stability. Within the scope of a WAN, NTP will provide an accuracy of small numbers of milliseconds. As the network scope gets finer, the accuracy of NTP can increase, allowing for submillisecond accuracy on LANs and sub-microsecond accuracy when using a precision time source such as a Global Positioning System (GPS) receiver or a caesium oscillator.

If a collection of clients all use NTP, then this set of clients can operate with a synchronized clock signal. A shared data model, where the modification time of the data is of critical importance, is one example of the use of NTP in a networked context. (I have relied on NTP timer accuracy at the microsecond level when trying to combine numerous discrete data sources, such as a web log on a server combined with a Domain Name System (DNS) query log from DNS resolvers and a packet trace.)

To consider NTP, it is necessary to consider the topic of timekeeping itself. It is useful to introduce some timekeeping terms at this juncture:

It would be reasonable to expect that the time is just the time, but that is not the case. The Universal Time reference standard has several versions, but these two standards are of interest to network timekeeping.

UT1 is the principal form of Universal Time. Although conceptually it is Mean Solar Time at 0° longitude, precise measurements of the Sun are difficult. Hence, it is computed from observations of distant quasars using long baseline interferometry, laser ranging of the Moon and artificial satellites, as well as the determination of GPS satellite orbits. UT1 is the same everywhere on Earth, and is proportional to the rotation angle of the Earth with respect to distant quasars, specifically the International Celestial Reference Frame (ICRF), neglecting some small adjustments.

The observations allow the determination of a measure of the Earth’s angle with respect to the ICRF, called the Earth Rotation Angle (ERA), which serves as a modern replacement for Greenwich Mean Sidereal Time). UT1 is required to follow the relationship

Coordinated Universal Time (UTC) is an atomic timescale that approximates UT1. It is the international standard on which civil time is based. It ticks SI seconds, in step with International Atomic Time (TAI). It usually has 86,400 SI seconds per day, but is kept within 0.9 seconds of UT1 by the introduction of occasional intercalary leap seconds. As of 2012 these leaps have always been positive, with a day of 86,401 seconds.[9]

NTP uses UTC, as distinct from the Greenwich Mean Time (GMT), as the reference clock standard. UTC uses the TAI time standard, based on the measurement of 1 second as 9,192,631,770 periods of the radiation emitted by a caesium-133 atom in the transition between the two hyperfine levels of its ground state, implying that, like UTC itself, NTP has to incorporate leap second adjustments from time to time.

NTP is an “absolute” time protocol, so that local time zones—and conversion of the absolute time to a calendar date and time with reference to a particular location on the Earth’s surface—are not an intrinsic part of the NTP protocol. This conversion from UTC to the wall-clock time, namely the local date and time, is left to the local host.

NTP uses the concepts of server and client. A server is a source of time information, and a client is a system that is attempting to synchronize its clock to a server.

Servers can be either a primary server or a secondary server. A primary server (sometimes also referred to as a stratum 1 server using terminology borrowed from the time reference architecture of the telephone network) is a server that receives a UTC time signal directly from an authoritative clock source, such as a configured atomic clock or—very commonly these days—a GPS signal source. A secondary server receives its time signal from one or more upstream servers, and distributes its time signal to one of more downstream servers and clients. Secondary servers can be thought of as clock signal repeaters, and their role is to relieve the client query load from the primary servers while still being able to provide their clients with a clock signal of comparable quality to that of the primary servers. The secondary servers need to be arranged in a strict hierarchy in terms of upstream and downstream, and the stratum terminology is often used to assist in this process.

Clients peer with servers in order to synchronize their internal clocks to the NTP time signal.

NTP operates over the User Datagram Protocol (UDP). An NTP server listens for client NTP packets on port 123. The NTP server is stateless and responds to each received client NTP packet in a simple transactional manner by adding fields to the received packet and passing the packet back to the original sender, without reference to preceding NTP transactions.

The NTP packets sent by the client to the server and the responses from the server to the client use a common format, as shown in Figure 1. 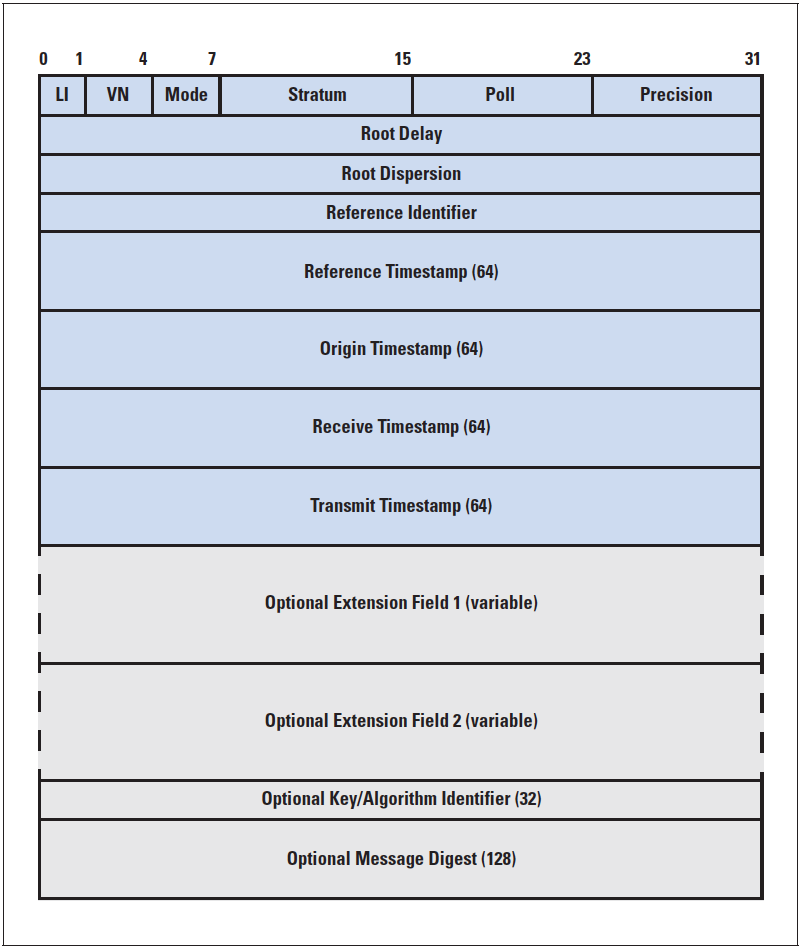 The header fields of the NTP message are as follows:

The next four fields use a 64-bit time-stamp value. This value is an unsigned 32-bit seconds value, and a 32-bit fractional part. In this notation the value 2.5 would be represented by the 64-bit string:

The smallest time fraction that can be represented in this format is 232 picoseconds.

These four parameters are passed into the client timekeeping function to drive the clock synchronization function, which we will look at in the next section.

The optional Key and Message Digest fields allow a client and a server to share a secret 128-bit key, and use this shared secret to generate a 128-bit MD5 hash of the key and the NTP message fields. This construct allows a client to detect attempts to inject false responses from a man-in the-middle attack.

The final part of this overview of the protocol operation is the polling frequency algorithm. A NTP client will send a message at regular intervals to a NTP server. This regular interval is commonly set to be 16 seconds. If the server is unreachable, NTP will back off from this polling rate, doubling the back-off time at each unsuccessful poll attempt to a minimum poll rate of 1 poll attempt every 36 hours. When NTP is attempting to resynchronize with a server, it will increase its polling frequency and send a burst of eight packets spaced at 2-second intervals.

When the client clock is operating within a sufficient small offset from the server clock, NTP lengthens the polling interval and sends the eight-packet burst every 4 to 8 minutes (or 256 to 512 seconds).

Timekeeping on the Client

The next part of the operation of NTP is how an NTP process on a client uses the information generated by the periodic polls to a server to moderate the local clock.

From an NTP poll transaction, the client can estimate the delay between the client and the server. Using the time fields described in Figure 3, the transmission delay can be calculated as the total time from transmission of the poll to reception of the response minus the recorded time for the server to process the poll and generate a response:

The offset of the client clock from the server clock can also be estimated by the following:

NTP uses the minimum of the last eight delay measurements as δ0. The selected offset, Θ0, is one measured at the lowest delay. The values (Θ0,δ0) become the NTP update value.

When a client is configured with a single server, the client clock is adjusted by a slew operation to bring the offset with the server clock to zero, as long as the server offset value is within an acceptable range.

When a client is configured with numerous servers, the client will use a selection algorithm to select the preferred server to synchronize against from among the candidate servers. Clustering of the time signals is performed to reject outlier servers, and then the algorithm selects the server with the lowest stratum with minimal offset and jitter values. The algorithm used by NTP to perform this operation is Marzullo’s Algorithm[2].

When NTP is configured on a client, it attempts to keep the client clock synchronized against the reference time standard. To do this task NTP conventionally adjusts the local time by small offsets (larger offsets may cause side effects on running applications, as has been found when processing leap seconds). This small adjustment is undertaken by an adjtime() system call, which slews the clock by altering the frequency of the software clock until the time correction is achieved. Slewing the clock is a slow process for large time offsets; a typical slew rate is 0.5 ms per second.

Obviously this informal description has taken a rather complex algorithm and some rather detailed math formulas without addressing the details. If you are interested in how NTP operates at a more detailed level, consult the references that follow, which will take you far deeper into the algorithms and the underlying models of clock selection and synchronization than I have done here.

NTP is in essence an extremely simple stateless transaction protocol that provides a quite surprising outcome. From a regular exchange of simple clock readings between a client and a server, it is possible for the client to train its clock to maintain a high degree of precision despite the possibility of potential problems in the stability and accuracy of the local clock and despite the fact that this time synchronization is occurring over network paths that impose a noise element in the form of jitter in the packet exchange between client and server. Much of today’s distributed Internet service infrastructure relies on a common time base, and this base is provided by the common use of the Network Time Protocol.