Packet switched networks benefit from buffers within the network’s switches. In the simplest case, if two packets arrive at a switch at the same time and are destined to the same output port, then one packet will need to wait in a buffer while the other packet is sent on, assuming that the switch does not want to needlessly discard packets. Not only do network buffers address such timing issues that are associated with multiplexing, they are also useful in smoothing packet bursts and performing rate adaptation that is necessary when packet sources are self-clocked. If buffers are generally good and improve data throughput, then more (or larger) buffers are better, right? This is not necessarily so, as buffers also add additional lag to a packet’s transit through the network. If you want to implement a low jitter service, then deep buffers are decidedly unfriendly! The result is the rather enigmatic observation that network buffers have to as big as they need to be, but no bigger!

The Internet adds an additional dimension to this topic. The majority of Internet traffic is still controlled by the rate adaptation mechanisms used by various forms of TCP congestion control protocols. The overall objective of these rate control mechanisms is to make efficient use of the network, such that there is no idle network resource when there is latent demand for more resource, and fair use of the network, such that if there are multiple flows within the network, then each flow will be given a proportionate share of the network’s resources, relative to the competing resource demands from other flows.

Buffers in a packet-switched communication network serve at least two purposes. They are used to impose some order on the highly erratic instantaneous packet rates that inherent when many diverse packet flows are multiplexed into a single transmission system, and to compensate for the propagation delay inherent in any congestion feedback control signal and the consequent coarseness of response to congestion events by end systems.

The study of buffer sizing is not one that occurs in isolation. The related areas of study encompass various forms of queueing disciplines used by these network elements, the congestion control protocols used by data senders and the mix of traffic that is brought to bear on the network. The area also encompasses considerations of hardware design, ASIC chip layouts, and the speed, cost and power requirements of switch hardware.

The topic of buffer sizing was the subject of a workshop at Stanford University in early December 2019. The workshop drew together academics, researchers, vendors and operators to look at this topic from their perspectives. It hosted 98 attendees from 12 countries with 26 from academia and 72 from industry. The following are my notes from this highly stimulating workshop.

In an autonomously managed packet network packet senders learn from reflections of data provided by packet receivers. One aim of each packet sender is a position of stability, where every packet that is passed into the network is matched against a packet leaving the network. In the TCP context this behaviour is termed ACK pacing. Each ACK describes how many bytes were removed from the network by the receiver, which, in turn, can be used to guide how much additional data can be passed into the network.

The unknown factor in this model is that the sender is not aware of what is a fair and efficient amount of network resource to claim for the data transaction. The TCP approach is to use a process of dynamic discovery where the sender probes the network with gently increasing sending rates until it receives an indication that the sending rate is too high, then backs off its sending rate to a point that it believes is lower than this sustainable maximum rate and resumes the probe activity [1].

This classic model of TCP flow management is termed additive increase, multiplicative decrease (AIMD) where the sending rate is increased by a constant amount over each time interval (usually the time to send a packet to the receiver and send an acknowledgement packet, or a Round Trip Time (RTT)) and in response to packet loss event by decreasing the sending rate by a proportion. The classic model of TCP uses an additive factor of 1 packet per RTT and a rate halving (divide by 2) in response to a packet loss. This results in a “sawtooth” TCP behaviour [2]. (Figure 1) 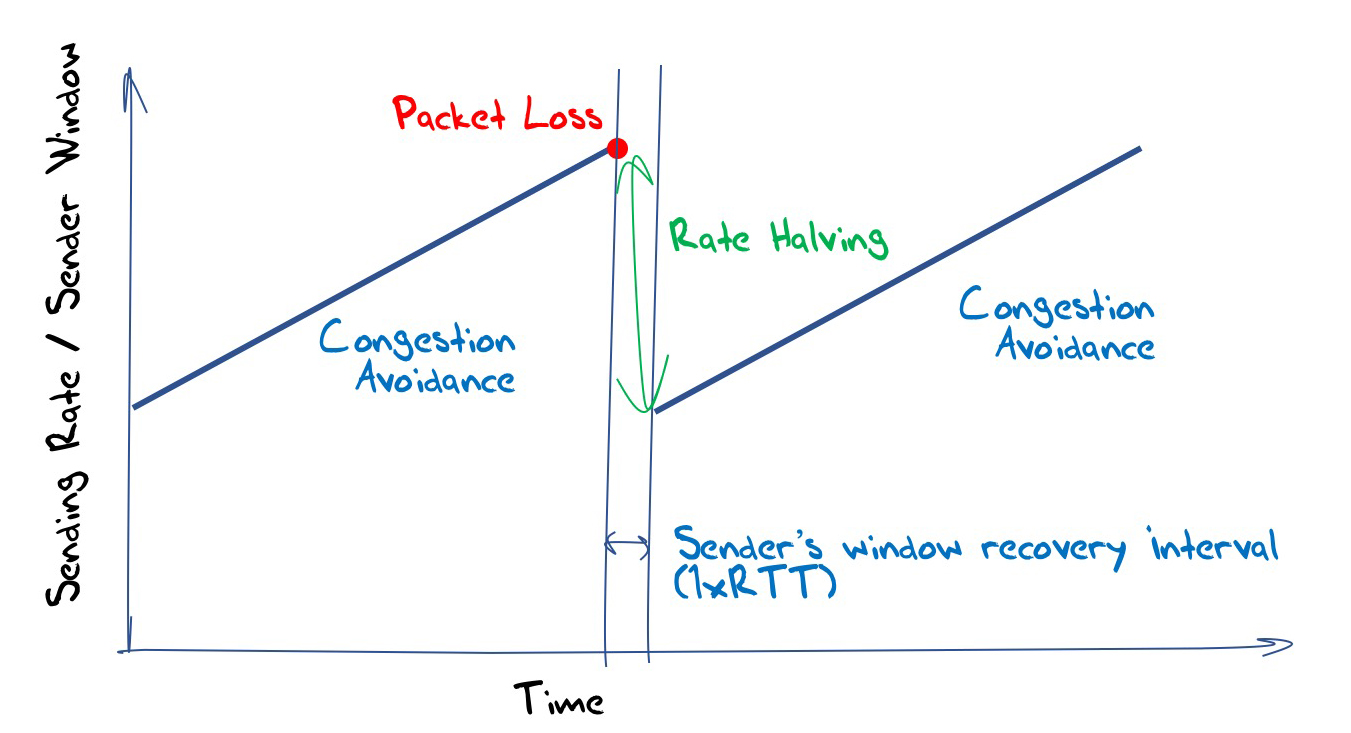 This implies that the achievable capacity of an AIMD TCP flow is inversely proportional to the square root of the packet loss probability.

But packet loss is not a random event. If we assume that packet loss is the result of buffer overflow, then we need to also consider buffers and buffer depth in more detail. An an informal standard for the Internet is that the buffer size should be equal to the delay bandwidth product of the link (the derivation of this result is explained in the next section).

As network link speeds increase, the associated buffers similarly need to increase in size, based on this engineering rule-of-thumb. The rapid progression of transmission systems from megabits per second to gigabits per second, and the prospect of moving to terabit systems in the near-term future pose particular scaling issues for silicon-based switching and buffer systems. As networks increase in scale, then the switching scaling factors tend to show multiplicative properties.

Self-clocking packet sources imply that congestion events within the network are inevitable, and any control mechanism that is imposed on these sources requires some form of feedback that will allow the source to craft an efficient response to congestion events. However, this feedback is constrained by propagation delays and this lag creates some coarseness in the response mechanisms. If the response is too extreme the sources will over-react to congestion and the network will head into instability with oscillations between periods of intense use and high packet loss and periods of idle operation. If the response is too small the congestion events will extend over time, leading to protracted periods of operation with full buffers, high lag, and high packet loss. Robust control algorithms need to be stable for general topologies with multiple constrained resources, and ways of achieving this are still the subject of investigation and experimentation. If feedback based on rate mismatch is available, then feedback based on queue size is not all that useful for stabilising long-lived flows. Feedback based on queue size is however important for clearing transient overloads.

Over more than three decades of experience with congestion management systems we’ve seen many theories, papers and experiments. Clearly, there is no general agreement on a preferred path to take with congestion control systems. However, a consistent factor here is the network buffer size, and the sizing of these buffers in relation to network capacity. One view, possibly an extreme view, says that buffers are at the root of all performance issues.

The task of dimensioning buffers in a switching system has implications right down to the design of the ASIC that implements the switch fabric. On board memory can be fast but its limited in capacity to some 100MB or less. Larger memory buffers need to be provisioned off-chip, requiring I/O logic to interface to the memory bank and the speed of the off-board system is typically slower than on board memory. Hybrid systems have to make a compromise between devoting chip capacity to switching, memory and external memory interfaces. And layered on top of these design trade-offs is the continuing need to switch at higher speed across larger numbers of ports.

One objective of this workshop was to continue the conversation about buffers, their relationship to congestion control and improve our understanding about the interdependence between buffer size, queuing control, self-clocking algorithms, network dimensioning and traffic profiles.

How big should a buffer be in the Internet?